The Boca Raton Airport is proud to spotlight one of its tenants, Sergeant Jewel Wigfall of the Florida Highway Patrol.

Sgt. Wigfall is the first and only African American member of the Florida Highway Patrol Aviation Unit. His mission is to patrol the highways from the sky.

Sgt. Wigfall always aspired to become a member of the Florida Highway Patrol Aviation Unit, so in 2000 he started working towards that goal and began taking private flight lessons. He is now rated as an Airline Transport Pilot, has just under 4000 flight hours with SIC Type Ratings in a Dassault Falcon 900 Jet, G550 (Gulfstream) and Beechcraft Premier I Jet.

In 2010 he was promoted to Sergeant as a member of the Florida Highway Patrol Aviation Unit and is assigned to Troup L, covering six counties. 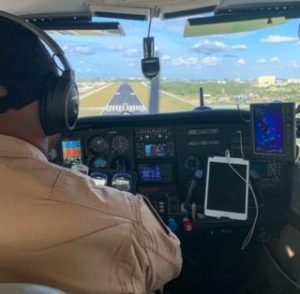 He currently is the only operator of a fixed-wing Skylane Cesena 182RG aircraft located at the Boca Raton Airport. In addition to speed enforcement, he is also responsible for advanced enforcement of drug trafficking, stolen vehicle recovery, search and rescue and surveillance flights. Additionally, he assists with Executive Transport when needed, flying a Twin-Engine Piper Navajo.

In recognition of his many contributions to the policing profession, Sgt. Wigfall has been awarded the Palm Beach Distinguished Law Officer of the Year, Distinguished Service Award for Heroism, and Law enforcement Commendation Medal from the Sons of the American Revolution.